Refer to the apple usage chart for varieties you may wish to use for your apple recipes. Keep in mind their seasonal availability as well.

Sift flour and salt into a mixing bowl. Cut in shortening.  Sprinkle water over mixture while mixing until it sticks together. Form into a ball. Cut in half. Roll out one half on floured surface and place into pie plate. Add apple pieces until pie dish is full. Add sugar and cinnamon evenly to apple pieces.  If desired, sprinkle in lemon juice for tartness to suit taste. Roll out second half of dough and place over the apples.  Fold over edges and crimp.  Prick the top crust with a fork in several places in the middle.  Brush crust surface with milk and sprinkle lightly with sugar.  Bake at 400 degrees F for about 20-25 minutes.

Option: Dice a pear and mix with apples for a different flavor.

In one bowl sift together flour, baking powder and salt. In a separate bowl, mix shortening until creamy, Gradually add sugar, Add vanilla and eggs and beat until fluffy. Add milk, apples and nuts.  Stir in sifted dry ingredients.  Pour batter into a greased 5×9 loaf pan and bake at 350 degrees F for 1 hour. Cool.

Combine flour and salt in a mixing bowl.  Cut in shortening.  In a measuring cup beat egg yolk (save the whites for later) and add enough milk to make 2/3 cup of liquid.  Mix well and stir into flour mixture until doughy. Between 2 sheets of floured wax paper, roll ½ of the dough into approx. 16 inch long rectangle. Place on greased sheet pan. Top with crushed corn flakes.  Add apple pieces, sugar and cinnamon.  Roll out second half of dough same as first and place on top of the apples.  Seal both top and bottom dough edges together.  Cut several slits into top center.  Beat egg whites until fluffy and brush on top of crust. Bake at 375 degrees F for approximately 50 minutes.

To top with a glaze combine 1 cup of powdered sugar with 5 teaspoons of milk and mix well. Drizzle over hot squares and let cool. 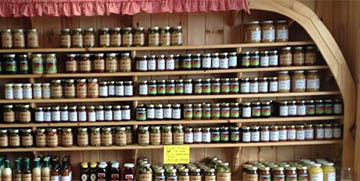